Tomorrow morning (Thursday), we fly from Colorado Springs to Atlanta, and then on to Munich where we'll arrive Friday morning.  We'll take a day to start recovery from the jetlag, then we'll pick up the bike and then head south into Austria.


It was nice being all packed up already, so today was spent doing normal things, like work and spending time with people, instead of all the packing hassle.  Now, on to bed early, since not everyone appreciates 4 a.m. the same way.
Posted by Matt McCabe at June 30, 2016 No comments:

Packing for this trip has certainly different than any other trip we've ever taken, and there have been very many previous trips.  Instead of just throwing a bunch of stuff we might need into a suitcase, we have had to consider each item. The reality of what one really needs on a trip is always much less than one initially thinks. Once we get to Munich, we'll be riding a motorcycle for nearly three weeks, and everything we take on the bike has to fit into a pair of fairly small hard cases. 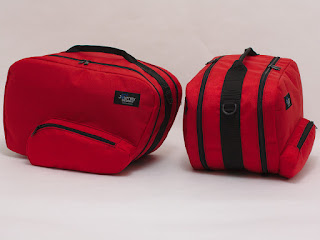 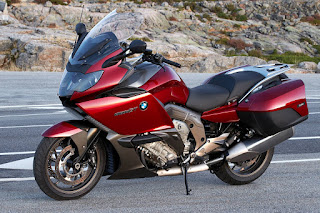 This year, La Rayne and I are celebrating our thirtieth year together, with our anniversary in December. Yes, we've been together for nearly a full thirty years. So, we've decided to take a bit of a trip. We'll be going a three week adventure together in central Europe.

On 30 June, just 11 days away, we catch a flight to Munich, where we'll be renting a rather awesome machine, a BMW K1600GT.  After a day or so to start to deal with jetlag, we'll head out on the road.

First, we'll visit the Dolomites in western Austria and northeast Italy, then on down the slopes to Venice. Next, we'll continue on down the eastern shores of Italy to the tiny nation of San Marino, which is only 24 square miles and claims to be the oldest sovereign state in the world. After a day there, we'll slow down and spend a few days in Tuscany, visiting a couple old walled cities like Siena and San Gimignano. Next we'll head up the western coast of Italy through Pisa and on to the fantastically preserved old cities in Cinque Terre National Park, hanging on the jagged cliffs.  From there, we turn back north beyond Milan and into Switzerland to ride through some spiral tunnels, up high mountain passes and past ancient glaciers. We'll roll through Lichtenstein, and back into the western edge of Austia, we'll slow down a bit again and visit some castles in southern Germany before competing our loop back in Munich.

Now, over the next few days, we'll work on packing our gear and supplies. Living off of a motorcycle for three weeks takes some level of sacrifice and it helps one realize what things we really need to carry around.

Much as German military strategist Helmuth von Moltke noted, “No battle plan survives contact with the enemy”, this meager travel plan will not fully survive events on the road. But a plan is needed... 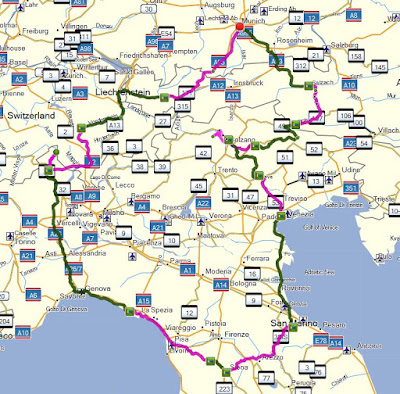