Yesterday, 2 July, we rode the Autobahn and some B-roads from Munich to Piesendorf, at the base of Grossglockner Pass. We're riding a new to us, unfamiliar bike over what will be some pretty challenging terrain.  So, the first day of riding is to get to our real starting point and to get sorted out with the bike and such.

Last night, it rained down here in the valley in Piesendorf, near Zell am See, so being from Colorado, I'm wondering how the snow is doing up on the pass we're planning on riding today. But, here we are and we're going to head up there and at least see how far we can get.

So, after topping up the gas tank for something north of $6/gallon, we headed up the pass, paid the toll and after just a couple miles ran into the clouds / fog.  The road was steep, windy and with quite a few switchbacks, but we didn't see much beyond the edge of the road, until we were well over the top and coming down the north side.  Once over the top, there is a side road around the back side of the peak, where we're able to see further than 40 feet and actually take a couple pictures.

Finally, we come out from the clouds and start seeing some trees and such. 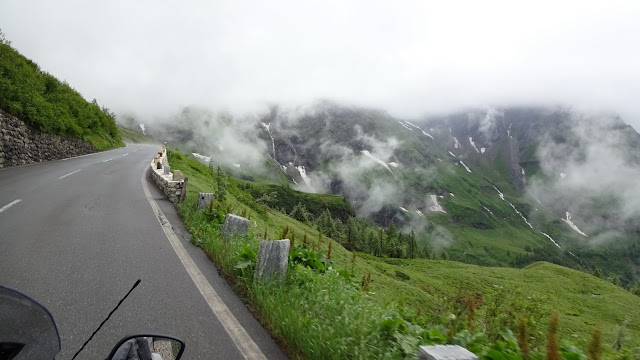 The Grossglockners glacier is the muddy, icy bit down in the middle of this valley.

... and now decending into the south side of the pass, the weather is starting to clear up a bit.  No sunshine, but nice clear views of the valley below.